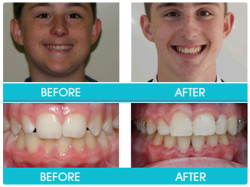 This boy was referred by his dentist as a 9 year old with a primary concern of 3 missing adult teeth.  As a number of baby teeth still had to fall out he was placed under observation. Nearly 3 years later and around 12 years of age he was ready for treatment.

In the lower jaw the adult second premolars [5th adult tooth on either side] were missing. The baby teeth were retained but had stumpy short roots. Due to the small size of their roots, it was thought these teeth would not last a lifetime. Their possible loss at some future time would result in a gap/s.

In the upper arch/jaw it was decided to open space [orange arrow] for artificial replacement of the missing upper left lateral incisor [radiographic image below]. This would assist with moving the upper front teeth back to the RHS [midline correction] and restoring the symmetry and appearance of the upper front teeth.

In the lower arch/jaw it was decided to remove the baby teeth [orange arrows].  Rather than maintain space for artificial replacement of the missing adult teeth it was decided to close these spaces. The lower wisdom teeth [red arrows] had little room at the back of the lower jaw to fit in.  Removal of the baby teeth and closure of these spaces by pulling forward the lower molar teeth [1st and 2nd molars] on each side would increase the room available for his lower wisdom teeth.

The goals of treatment therefore included reducing the need for replacement of 3 missing adult teeth to the need for replacing only 1 adult tooth. At the same time space would be created in the lower jaw to accommodate the 2 lower wisdom teeth [many people simply don’t have enough room for their wisdom teeth – 2 upper and 2 lower – and end up having all 4 removed].

In order to achieve these goals braces would be required.  During treatment the cheek teeth in front of where the baby teeth were removed in the lower jaw would have to be held in position to preserve their good bite relations with the upper cheek teeth. Simultaneously the lower 1st and 2nd molars would have to be pulled forward into the baby tooth extraction sites. It was estimated treatment would take around 24 months.

The original treatment time estimate proved overly optimistic. 20 months into treatment the ‘extraction’ spaces in the lower jaw where the baby teeth had once been had been closed. The bite and alignment of the teeth needed further refinement as did the space in the upper arch for artificial replacement of the missing upper left lateral incisor.

At 29 months into treatment another radiograph [image below] was taken. This indicated further spacing of the roots of the teeth either side of the missing upper left lateral incisor was required [orange arrow].

At 35 months treatment was complete. An upper removable retainer [plate] with an artificial tooth attached was issued to produce an ‘intact smile’ and full set of upper front teeth.

The numbers on the teeth in the clinical pictures below represent the numbers of the teeth. The upper row of pictures shows the bite before treatment. The missing adult tooth ‘space’ is shown by the orange arrow. The lower row of pictures shows the result of treatment and the bite at ‘braces off’. The artificial tooth is shown by the orange arrow. Note the amount of space that was required to be opened between teeth 1 and 3 for artificial replacement of the upper left lateral incisor. The clips which hold the plate ‘in’ can also be seen behind tooth 3 and attaching to tooth 6.

The treatment changes in the upper and the lower teeth can also be further appreciated by viewing the clinical photographs taken from the perspective of the biting surfaces [below]. The picture on the left is of the upper teeth before treatment. The 2nd picture from the left shows the upper teeth with the plate being worn at the end of treatment. The artificial tooth is again denoted by the orange arrow.

The plate in the upper arch can be used until such times as the missing upper left lateral incisor is permanently replaced. Replacement of missing adult front teeth is usually delayed until adulthood.