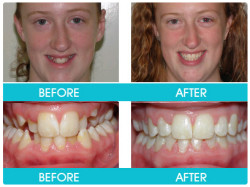 This female teenager presented worried about the crowding and appearance of her teeth.

Examination showed a narrow upper jaw [constricted maxilla], crowded upper and lower front teeth, upper front teeth caught behind lower front teeth [anterior crossbite] and upper cheek teeth caught inside the lower cheek teeth [posterior crossbites]. The upper right adult second premolar was missing [didn’t develop].  As a consequence the upper right baby second molar [URE] was retained. All 3rd molars or wisdom teeth were unerupted and developing in the jaw bones. There didn’t appear as though there would be enough room for these to fit in.

Three approaches to treatment were proposed:

It was decided to proceed with treatment as outlined in option 1 [removal of all second molars]. These teeth were removed uneventfully under sedation before her orthodontic treatment was commenced.

Braces were applied to the upper and lower teeth. 10 months into treatment an upper fixed expansion appliance [RPE] was fitted into the roof of her mouth to widen her narrow upper jaw.  The RPE remained in place for 8 months before being removed. Treatment continued for another 9 months. Total treatment time was 27 months with elastic bands being worn for about ½ this time.

Thanks to a wonderful patient a great result was achieved. It is anticipated her wisdom teeth will erupt into her mouth with further growth and development.