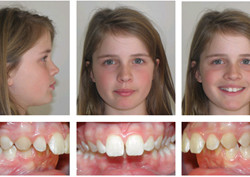 This female teenager presented concerned about the ‘bucky’ or ‘protrusive’ appearance of her 2 BIG upper front teeth.

A single phase treatment approach utilizing braces applied to her upper and lower teeth was recommended. An estimate of 18-24 months for treatment was provided. A non-extraction approach [without removal of adult teeth] was the cornerstone of this approach. Elastic band wear +/- springs to advance the lower teeth to meet the upper teeth was planned for. 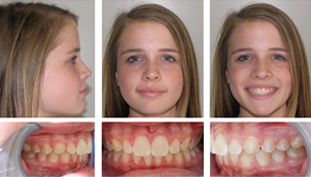 While the difference in terminology [FORWARD vs BEHIND] may appear nothing more than a ‘play on words’, they are significant when it comes to diagnosis and treatment planning. Rather than design treatment to ‘pull’ the upper front teeth back to the lower front teeth, treatment focused on maintaining  the position of the upper teeth and upper lip and ‘advancing’ the lower teeth to meet the upper teeth. As this young female was still growing it was hoped that growth would assist with her orthodontic correction.

Patient co-operation/compliance with orthodontic treatment is an often under appreciated component of the success and expediency of treatment. Not breaking the braces/minimising breakages [broken/loose/unstuck brackets/attachments], attending appointments as scheduled,  wearing  elastics bands as directed  and good oral hygiene [cleaning of the teeth, gums and braces] are all factors which can have profound effects on the outcome of treatment and time taken to complete treatment. All of the above factors are typically patient centric or controllable by the patient and ALL except for oral hygiene can save MANY months of treatment time.

Corrections such as this can and DO take longer than 14 months. Bite correction was essentially the focus of treatment from day 1 as her teeth were relatively straight to begin with. The short treatment duration was greatly assisted by a co-operative patient who wore her elastics well, attended appointments as scheduled and broke only 1 bracket [0 breakages would have been even better!]. Her physiology and growth also proved favourable during the course of her orthodontic treatment. Everything fell into place!

The changes in her appearance from before treatment to her braces off appointment reflect both her growth during that time and the effects of orthodontic treatment. The areas orthodontic treatment has the most influence over are the contours and positions of the lips, the position of the teeth and the position of the chin. Those changes in this case are depicted in the photographs below. 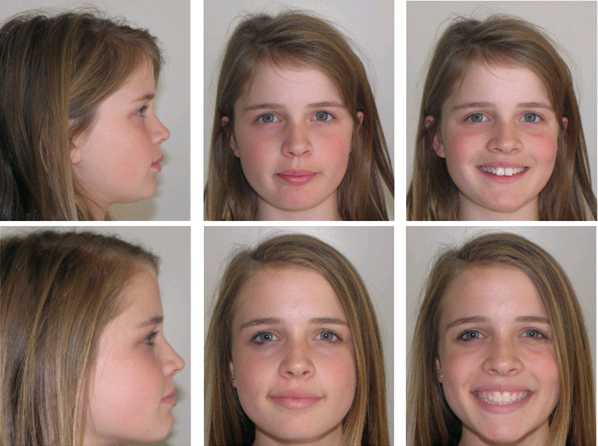