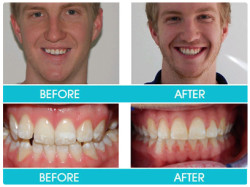 A fixed expander would be used to widen his narrow upper jaw and teeth. Braces would be used to straighten his teeth. The idea was to correct the narrowness of his upper jaw and teeth, align the upper and lower teeth and correct his bite at the same time.
When enamel is mottled or flecked as in this case, the stickiness of the glues used to attach the braces to the teeth can be reduced. The braces are at increased risk of becoming loose/detached from the teeth. This can increase the need for repairs to be undertaken and slow treatment progress. To try and avoid unnecessary breakages an ‘adhesion booster’ would be used when gluing the braces to his teeth. An estimated treatment time of about 18-24 months was provided.

Treatment extended over a period of 14 months. No breakages of the braces occurred and all scheduled appointments were attended. The expansion appliance was removed in the 7th month of treatment leaving just the braces on the teeth. Elastic bands were then worn for a period of 2 months to fit the upper to the lower teeth [settle the bite]. The braces remained in place for a further 5 months before being removed and retainers fitted.

The narrowing of the upper teeth in the cheek regions [crossbites] is readily apparent in the before treatment photographs. A mild inflammation of the triangular gum extensions [interdental papillae] between the lower front teeth [incisors] is seen in the end of treatment photographs taken at the braces removal appointment. This will readily resolve in a short time with regular tooth and gum care now the braces have been removed.

The change in shape and alignment of the upper and lower teeth that accompanied treatment is demonstrated above. A ‘fixed’ retainer is seen glued behind the lower front teeth in the picture on the right.