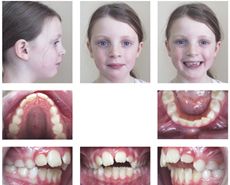 This young girl was brought in by her mother in relation to a thumb sucking habit. It was reported she sucked her thumb after school, ½ hour of a night before bed and occasionally when tired.

The thumb sucking habit was preventing the normal eruption of her upper [and lower] adult teeth and at the same time pulling her upper front teeth forward. As a result her upper arch was narrowing towards the front of her mouth [“V” rather than “U” shaped]. When her thumb was not in her mouth her tongue could occupy the defect, thereby maintaining the deformity.

As the child was in the middle of the mixed dentition with 12 adult and 12 baby teeth present, it was decided to commence treatment in the first instance with the aim of stopping the thumb sucking behaviour. The habit was damaging the development of her jaws and teeth.

A habit cessation appliance [Thumb/tongue guard] was used.  This is a ‘passive’ appliance that doesn’t apply pressure to the teeth, jaws or soft tissues [lips and tongue].  It relies on a ‘fence type arrangement’ behind the front teeth to discourage placement of the thumb in the mouth and guard/restrain the tongue from entering the defect.

The Thumb/tongue guard was ‘fixed’ to her teeth. It could not be removed by her, didn’t rely on her co-operation with being worn and being fixed to her teeth it was unlikely to be misplaced/lost. These were all considered advantages over a ‘removable’ Thumb/tongue guard.  The anchor teeth and appliance were also easily cleanable with normal tooth brushing.

Her openbite started to respond favourably to the fixed Thumb/tongue guard almost immediately. Six weeks after placement the vertical gap [openbite] between her front teeth had noticeably reduced, despite her thumb sucking persisting. The habit was still present around 6 months after placement of the appliance. Even though the habit was persisting the Thumb/tongue guard had tipped the balance in favour of the ‘eruption’ of her teeth with consequential closure of her openbite occurring.

Sometime in between placement of the Thumb/tongue guard and 20 months later when it was removed due to breakage the thumb sucking habit had stopped. A break from any form of treatment then followed for a period of about 9 months.

Thereafter a headgear attaching to her upper molars for nightly wear when sleeping was fitted to begin correcting her 10 mm overjet. Nightly headgear wear continued for another 25 months at which time herbraces were placed. It was around this time or early into her braces treatment the nightly headgear wear stopped.

Placement of the Thumb/tongue guard allowed for the ‘eruptive’ potential of the adult front teeth to be ‘fully’ expressed. The thumb habit was impeding this natural process.  The open bite between her adult front teeth closed with eruption of these teeth.

Stage 3 involved braces over a period of 12 months to finalise the result. This was undertaken when her adult teeth had erupted. Treatment consisted of closing residual spacing between her upper teeth, aligning her lower front teeth, correcting a posterior left crossbite and detailing the individual positions of the teeth and the fit of the upper to the lower teeth.

Thumb [digit] sucking habits can be socially unacceptable and embarrassing. While they are frequently associated with childhood, they can persist into the teenage and adult years. Many people confine the habit to the privacy of their home or family environment away from potential onlookers. Speech impediments may/may not accompany a thumb [digit] sucking habit.

Thumb sucking need not necessarily lead to the type of defect depicted in this article nor require the same intervention/treatment described here. Intervention should be considered when the sucking habit is altering the growth and development of the jaws and/or teeth.

Thumb sucking habits can be extremely difficult and frustrating to stop. Consulting an orthodontist might be the most appropriate way forward.  I have heard of:

I am sure there are other tricks too!