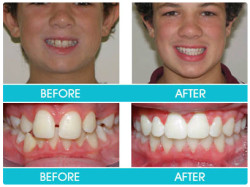 This male teenager was referred by his dentist due to a lack of space for his upper right canine [eye tooth].

Examination showed his upper adult front teeth spaced, leaning and offset to his RHS.  His upper right little front tooth [lateral incisor] had drifted so far to the RHS that it was sitting in the space reserved for his upper right eye tooth [canine]. As a consequence his upper right canine was ‘wedged’ [impacted] between two adult teeth with no hope of it coming into position without intervention. On his LHS sufficient space existed between his teeth for his upper left canine to appear [see “3D” images below]. 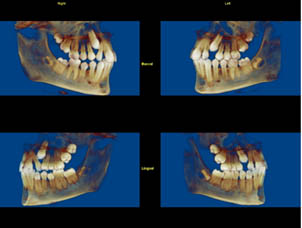 A single phase treatment approach utilizingbraces applied to his upper and lower teeth was recommended and accepted. A non-extraction treatment approach was adopted. His wisdom teeth would in all likelihood be candidates for future removal.

The treatment plan called for space opening on the RHS to create room for his upper right canine to erupt. Sufficient space existed on the LHS for his upper left canine to erupt.  When the upper canines appeared through the gums braces would be glued to these teeth to position them correctly. If either or both canine/s did not appear within a reasonable time frame during treatment he would be referred for ‘exposure’ of these teeth.

The upper left canine began emerging through the gums 8 months into his treatment. 14 months into treatment it had erupted sufficiently to allow an orthodontic attachment [bracket / brace] to be glued to it to encourage further eruption and correct positioning.

The upper right canine began emerging through the gums 20 months into his treatment. 22 months into treatment it had erupted sufficiently to allow an orthodontic attachment to be glued to it to encourage further eruption and correct positioning. Ten months later, 32 months after treatment commencement, his braces were removed.

The pictures below show before and after comparisons of his upper and lower teeth viewed from the biting surfaces. A lower ‘fixed’ retainer [to ‘retain’ or ‘hold’ the positions of the lower front teeth] can be seen in the ‘after’ picture at right. An upper ‘removable’ retainer [not pictured] was issued for wear in the upper arch following removal of his braces.