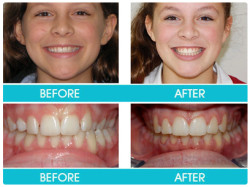 This female teenager was referred by her dentist as a result of impacted adult teeth. Impacted teeth can generally be thought of as teeth which are ‘trapped’ or ‘caught’ in the jaw bone/s beyond the time when they should be in the mouth. Teeth which are also in the mouth but not fully erupted can also be impacted.

Examination showed for the most part well aligned upper and lower teeth. In the upper arch her two baby upper canines [c] were ‘solidly’ in place. The adult replacements, the permanent upper canines were no where to be seen. A crossbite [upper teeth biting inside the lower teeth] was present on the LHS.

Review of her radiograph confirmed the presence of both upper permanent canines [13 and 23]. These teeth were fully developed, impacted and in the wrong positions in her upper jaw. 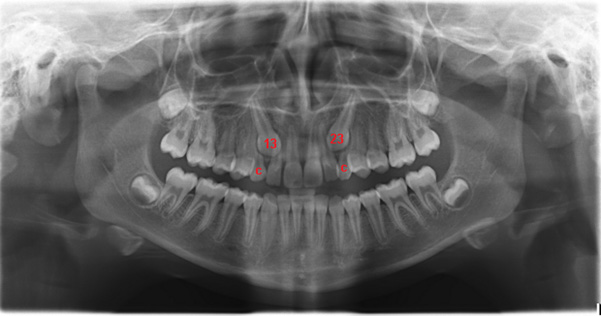 The baby upper canines would need to be removed. At the same time the impacted adult upper canines would be exposed and attachments glued to them. These procedures would occur first. Her orthodontic treatment would be delayed for a few weeks to allow ‘gum healing’ following removal of the baby teeth and exposure of the adult teeth.  Braces would be used to gradually pull/guide the upper adult canines into position.  An estimate of 24 months in treatment was provided.

Treatment was completed over a period of 19 months.  All scheduled appointments were attended. Tooth brushing [oral hygiene] was excellent throughout treatment.  Only 2 breakages were recorded during treatment, the last being a few weeks before her braces were removed. Retention was by means of an upper removable retainer and lower fixed retainer.